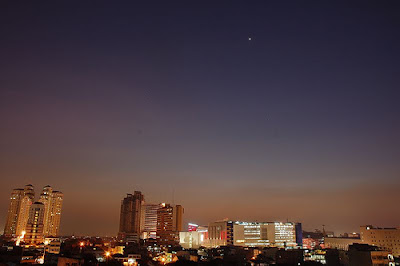 The level of pollution in major cities in the world has become increasingly serious over the years, especially in parts of Asia, including Indonesia. ABC is in asia at nicknamed Asian Brown Clouds is a layer of air pollutants which includes parts of South Asia, the northern part of the Indian Ocean, India, and Pakistan. Can be seen from satellite images, clouds appear as a giant brown stain hanging in the air over most of South Asia and the Indian Ocean every year between January and March, possibly also during the months before and so on then. The term was coined in the report of the UNEP Ocean HindiaPercobaan (INDOEX). 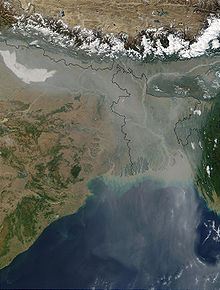 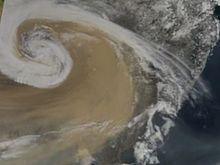 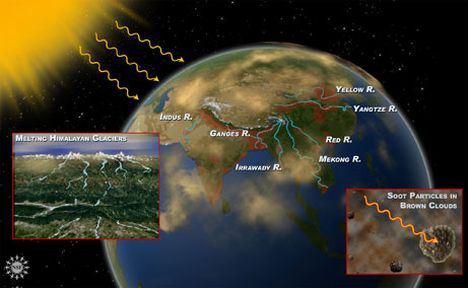 Asian or Asian brown cloud brown clouds are created by a variety of airborne particles and pollutants from combustion (woodfires for example, cars, and factories), the combustion of biomass. combustion and industrial processes with untreated perfect. Brown cloud has always been associated with the winter monsoon (November / December to April) and appear as long as no rain is wet to wash pollutants from the air.

ObservationA layer of pollution continues to be observed during the Indian Ocean Experiment (INDOEX) with intensive field observations in 1999 and described in the impact assessment studies how Brown Clouds UNEP published 2002. Scientists in India claimed that the Asian Brown Clouds are not always specific to Asia, but could be part Earth anywhere depending on pollution and the greenhouse effect in that place. Furthermore, when the United Nations Environment Programme (UNEP) organized an international follow-up project, the subject of research renamed Atmospheric Brown Cloud / Atmospheric brown clouds (ABC's) with a focus on Asia.The cloud was also reported by NASA in 2004 and 2007.Although the aerosol particles is generally associated with the effects of global cooling, recent studies have shown that they really can have an effect such as the effect of greenhouse warming in specific regions such as the Himalayas. In fact, this effect "Brown Clouds" - which is full of aerosol cloud layer - has increased warming of the atmosphere in India about 50%. 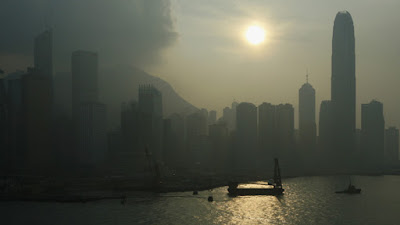 In terms of Health: One of the main impact is on health. A 2002 study showed that nearly two million people die every year in India alone, of the natural conditions related to Brown Clouds.

In terms of weather in each Region: A second assessment study which was published in 2008. It highlighted regional problems concerning:

1. Changes in rainfall patterns with monsoon Asia. The weakening of the monsoon in India after the observed effects of drought and flooding also in northern parts of southern China were affected by the brown cloud.2. Increased rainfall over Australia's Top End and the Kimberley region. A CSIRO research has found that by displacing the south ekuatortermal through cooling air over East Asia, monsoon which brings most of the rain water in the region has intensified and moved to the south.3. There was a reduction in glaciers and snow in the Himalayas. The cause is caused by rising temperatures more in higher areas, the combined heating effect of greenhouse gases and the Asian Brown Cloud. Black carbon deposition also lowers reflection and exacerbating the situation. Asian glacial melting could lead to water shortages and floods for hundreds of millions of people who tinggaldi downstream.4. Decrease in crop plants. Increased surface ozone concentrations possible to affect crop yields become negative. The impact on certain crops. As in India, a study done shows that gas pollutants dispersed in the air has caused climate change and air temperatures, thus affecting the yield of rice production in India. As a result, yields slumped 20-25 percent.The intensity of cyclones in the Arabian Sea 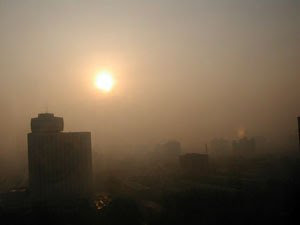 A study in 2011 found that pollution makes the Arabian Sea cyclones more intense as atmospheric brown clouds have been producing wind patterns that prevent weakening wind shear patterns that historically has made a cyclone in the Arabian Sea into a big storm. This phenomenon was discovered as a liability on the formation of more powerful storms in 2007 and 2010 the first recorded storms to enter the Gulf of Oman.

The 2008 report also addresses the concerns of global warming and concluded that the brown cloud has a density of 20 to 80 percent of greenhouse gases in a few centuries ago. The report suggests that air pollution may have an effect as well as strengthen and enlarge the global warming.Another major impact was on the ice at the poles. Black carbon layer in the Asian Brown Cloud can reflect the sun and Earth could experience a dimming but can occur elsewhere warming by absorbing the incoming radiation and atmospheric warming there. Carbon black having an impact three times more effective than carbon dioxide / greenhouse gases and the most common result is the effect of the melting of polar ice and snow.Carbon black in snowy regions causes about three times the change in temperature as carbon dioxide in the atmosphere. On the snowy area even at concentrations below five parts of carbon black permiliar trigger melting of the ice / snow, and may be responsible as 94persen of warming the Arctic.As a result, the Arctic ice sheet shrunk to the sea all year round, with more ice melting in the months of spring and summer and a little glacier formed in the fall and winter. Arctic sea ice melts during the summer of 2010 to cover the third smallest area.The extent of Arctic ice continues to decline at least by 11% per decade, and very quickly, in other words. Mark Serreze claims that prediction until September 2030, or more, the Arctic ice might not be there at all. It will look like a blue ocean. 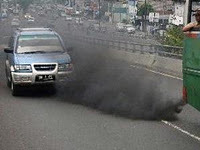 The impact in Southeast Asia has begun to be seen in big cities such as Malaysia, Vietnam, Thailand and Indonesia. Particularly in Indonesia, the most striking is in Jakarta and major cities in Indonesia densely populated. The level of air pollution in Indonesia is alarming. In fact, one study reported that Indonesia is a country with the third highest level of air pollution in the world. World Bank also put Jakarta became one of the cities with high levels of pollutants / highest particulate after Beijing, New Delhi and Mexico City.The Indonesiaa itself, as data presented by the Assessment of Ozone and Air Pollution Institute of Aeronautics and Space Agency (Lapan), West Java was ranked highest air pollution in Indonesia.Of all the existing causes of air pollution, transportation emissions proved to be the highest contributor to air pollution in Indonesia, which is about 85 percent. This is caused by the growth rate of vehicle ownership is high. Most of the vehicles it produces emissions that bad, either due to inadequate maintenance, or from the use of fuel with less good quality (eg high lead levels). Forest fires and industry also played a role. And from a recent study that the effects of the ABC in Indonesia also largely influenced by residual household waste gas for solid household activities in Indonesia.Impact of Air Pollution On HealthIn terms of health, air pollution may result in disruption of the health and growth of children. Eg anemia. Indeed, in the growth of red blood cells continue to be produced. However, due to the inclusion of lead will damage the red blood cells, then the amount is increasingly reduced and ultimately children suffer from anemia.

Lead enters the body will also damage the red blood cells that should be sent to the brain. As a result, there was a disturbance in the brain. It is most feared, the child may experience impaired ability to think, comprehension is slow, and low IQ level. In terms of physical growth, the existence of this lead will have an impact on some disorders, such as growth retardation and hearing loss at specific frequencies.In adults, lead can affect the reproductive system or fertility. These substances can reduce the number and function of sperm, causing infertility. Lead also interfere with the function of the heart, kidneys, and cause stroke and cancer. Pregnant women face a high risk if the levels of lead in their blood in the normal threshold. This will lead to the fetus and hamper the growth and development of his brain. Another risk is the mother suffered a miscarriage. To note, the lead like enemies in a blanket. Initially, high lead levels in the blood will not show any symptoms of the disease. Emerging impact in the long term.

Air Pollution Impacts on the Environment 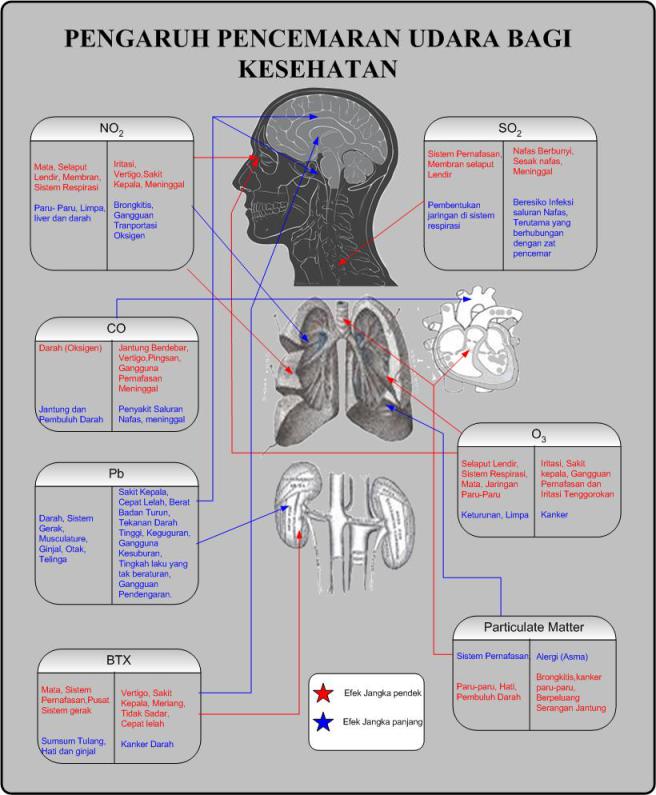 1. Inhibits photosynthesis in plants. Against plants growing in areas with high air pollution levels can be stunted and prone to disease, among others chlorosis, necrosis, and black spots. Particulate deposited on plant surfaces may impede the process of photosynthesis.
2. Causes of acid rain. alkaline pH of rainwater is 5.6 because of the CO2 in the atmosphere. Air pollutants such as SO2 and NO2 reacts with water to form acid rain and lowering the pH of rainwater. The impact of acid rain, among others: Affects the quality of surface water, damaging the plant, Dissolves heavy metals contained in the soil thus affecting the quality of groundwater and surface water, as well as corrosive Characteristically thus damaging material and construction.

3. Enhance the greenhouse effect. The greenhouse effect is caused by the presence of CO2, CFCs, methane, ozone, and N2O in the troposphere which absorbs the sun's heat radiation reflected by the surface of the earth. As a result of heat trapped in the troposphere and rise to the phenomenon of global warming. Global warming itself will result in; Melting ice at the poles, regional and global climate change, changes the life cycle of flora and fauna.

4. Damage to the ozone layer. Ozone layer in the stratosphere (20-35 km altitude) is a natural protector of earth that serves to filter ultraviolet B radiation from the sun. The formation and decomposition of ozone molecules (O3) occurs naturally in the stratosphere. Emissions of CFCs reach the stratosphere is very stable and causes the rate of decomposition of ozone molecules faster than formation, thus forming the holes in the ozone layer. Damage to the ozone layer causing UV-B sun rays are not filtered and can mengakibatkankanker skin as well as diseases in plants.
Reducing Air Pollution
To cope with air pollution can be done through several businesses, among others:

This information may be useful bit ...